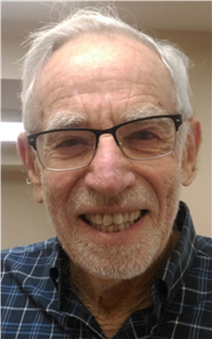 When Rabbi asked me to present my Jewish journey, it made me think: “Why is Judaism important to me? What is it about Judaism that is important? And why did all these events happen?”

Judaism is important to me because it emphasizes family values. Basically, when you think about it, it’s a culture. The other important aspect is the fact that it encourages questioning, which is really very unique among most religions. And I’m an individual who always questions.

As I grew up, I lived with my grandparents as well as my parents. The combination was very helpful. My grandparents were the people I went to when I had questions on Judaism, and they were loving, helpful and friendly towards me.

Next I’d like to talk about where we lived. We started out living in Los Angeles, in what is now part of South-Central Los Angeles at 60th and Vermont. We moved to La Canada when I was 7 or 8, which was out in the country and did not have any Jewish temples or friends nearby. From there we moved to Pasadena right after the war, and that was the first time I had an association with Jewish groups. I joined a Jewish youth group at a temple in Pasadena and met Rabbi Vorspan who later officiated at my wedding. From there my family moved back to a Jewish neighborhood in Los Angeles because my parents wanted to be closer to Jewish people. I met my wife Miriam in December of 1997 and married her 4 months later.

From there we moved to Orange County because that is where I obtained my first job after graduating. We found a nice place in the city of Orange and had two wonderful daughters there, many of you have met and seen them. When our daughters were about 5 years old, we decided it was important for them to get a Jewish education. That is when we joined Temple Beth Sholom in Tustin. This was an important point in my Jewish journey, because it was a very friendly environment that cemented my desire to become involved in Judaism.

I want to comment that the President of Temple Beth Sholom at the time was Mr Don Devor who was a nice guy, he is the father of our rabbi, Rabbi Sherman. You might say I knew Rabbi Sherman before she was born! I became involved with the board and was responsible for the temple religious school. I did not remember but my daughter reminded me that since I was on the board in charge of the religious school, I became bar mitzvah at that time. We stayed there for a very happy 25 years and we only left because we moved to Newport Beach and Tustin was too far to travel for services and other activities.

When we moved to Newport Beach, we joined University Synagogue and I became involved there. Rabbi Rachlis became another important part of my Jewish journey.

How did I become involved with Heritage Pointe? That happened in about 1993 when we joined a group of people who were trying to start a Jewish senior citizen home in Orange County. From that time on, we have been involved with Heritage Pointe. In December of 2017, Miriam developed Alzheimers and needed more help than I could offer. We moved here, and I have been here ever since.

In conclusion I want to say that there are two forces that have enhanced the senior part of my Jewish journey. The first was Heritage Pointe, which was very important because it helped me understand and appreciate the Jewish holidays and other aspects of Judaism, and of course our wonderful Rabbi has been a major factor in that enhancement. The second factor is someone I met at Heritage Pointe by the name of Zelda Smith. She has a strong Jewish background, and she is intelligent and pleasant. We have had many long hours of discussion on various Jewish religious aspects, and I want to thank her for all the help she has given me.

That is my Jewish journey up to this point.  I hope the rest of it is as pleasant and rewarding.